Nick Swisher has always been one of my favorite players.

If Bryce Harper really wants to “Make Baseball Fun Again”, he’ll hold out on his contract until the Nationals sign Nick Swisher. 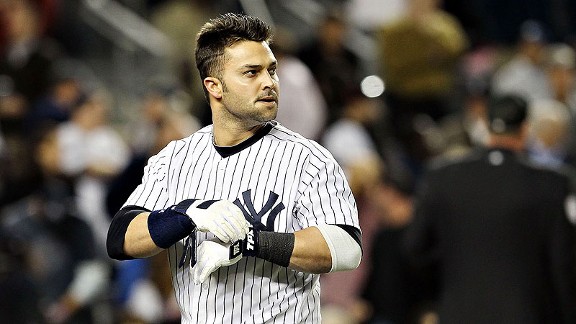 But my favorite thing about Nick Swisher may be his love of hockey. There’s not many people out in this world who hate themselves enough to jump on the Columbus Blue Jackets bandwagon. I consider myself a Blue Jackets fan, and I barely have the stomach to keep up with that dumpster fire.

What a beauty. As much as I love watching Nick Swisher in the Majors, to me, his whole persona screams minor league hero. Maybe I just think that because he seems like the stereotypical Beer League hockey player, and I equate Minor League Baseball with Beer League Hockey. Which I think is a fair comparison. Now I know Nick will never make it to Mike Hessman levels….

In an ideal world, Nick Swisher will end up playing for the Toledo Mud Hens, double the size of his Grizz Wintergreen chomp, will completely abandon the idea of hitting for contact, and begin an assault on the scoreboard of Fifth Third Field. As much as Nick Swisher loves Ohio, this is a real possibility. Fingers crossed Toledo.