DISCLAIMER 1: I realize that at this point in my life, me calling someone out of pocket is kinda the pot calling the kettle black.

DISCLAIMER 2: Jose Canseco knows that he is completely out of pocket. So I’m not hating on the guy. I’m celebrating him.

sometimes I dont even know what I am doing .

Regardless, I’ve been fascinated with Jose Canseco for a while. Honestly, the only reason I haven’t written this blog until now is because Jose Canseco’s social media activity is so outrageous that I have no idea where to begin. I’ve been scrolling thru and screen shotting his tweets for days. They just keep getting better and better and better.

Let’s start with Chloe Canseco. Jose will refer to Chloe Canseco as his daughter, but don’t be fooled. Although Chloe can Skype, and run her own Twitter account, she is in fact, an animal.

Skyping my daughter @ChloeCanseco . See me in the left bottom corner ? My angel Chloe 🐾😇🐶 pic.twitter.com/bR24gWuaI7

Now Jose does sometimes show signs of being in pocket. He remembers what got him to where he is today. The fucking longball. Jose has always stayed true to the longball. It’s the reason he loved steroids so much. Jose doesn’t care about baseball, rules, integrity, or his physical/mental health, Jose cares about the longball, and he will never let it die.

My PX4040 invention will bring back the longball

Seriously tho — the irony of Jose Canseco in 2016 saying he has an “invention” that will bring back the long ball is total bananas. I can’t even imagine what this could be, there’s no trace of this thing online, it’s probably some type of powder, but I’m sure it’ll be great.

Jose certainly fancies himself an inventor, and sees no reason to limit his inventions to the longball. And truthfully, I don’t either. Reach for the stars, Jose. Literally..

Are you a farmer in Nevada that has had crop circles? I need to talk to you .

Do you have crop circles? I have one farmer looking for more to test my trap .

Are you a farmer in Nevada who likes to party? If so, I will personally fly out to your farm and make a field of crop circles myself, just to get Jose to come over. This is a once in a lifetime opportunity. There is a real life possibility that we can get Jose Canseco show up at your humble Nevada farm with a FUCKING ALIEN TRAP!!!

I would pay for that experience. Wouldn’t you? Think of the stories this man has! And think of the FUCKING ALIEN TRAP HE HAS!!! Like, if you could just call someone up and rent Jose Canseco for a couple of days, wouldn’t you do it? Welp..

This is spectacular. It appears that literally ANYBODY in the world can pay for spend a weekend with Jose. 702 622 5890 I absolutely have this number saved in my phone as Jose Canseco. Because one night, when I take my phone out of pocket, I’m gonna call it up, and schedule the most legendary bros weekend of all time.

Just think of all the wisdom Jose could impart unto you. This man is a thinker. He’s not just another meathead, roid rage jock. He’s a Renaissance man. A Jack of All Trades if you will. He sees the world in a different way than you and I. For instance, he recently conducted a serious psychological study. The #CansecoLemonStudy. and let me tell you, it’s some groundbreaking stuff. 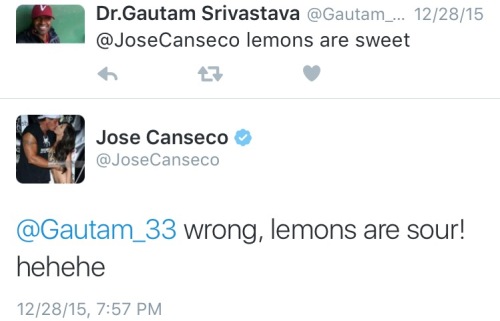 Now what Jose has done up to this point is make a joke. A joke about grammar, presented in the form of a question. The people answering care about Jose, and want him to nail down the finer points of the English language. But Jose is about the flip the script on these fools SO HARD. 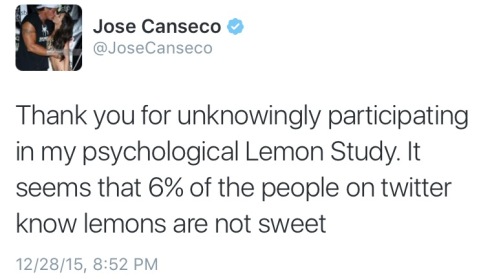 Boy did that take a left turn. This is why we have crappy presidents. What a leap. I love it. In reality, this study could not be more flawed, but rules just do not apply to Jose Canseco. I could pick this man’s brain for hours. Not to mention, he must be on some crazy cocktail of drugs just to keep him alive after all the damage he certainly has from rampant steroid use. We could vibe out and watch Homerun Derbys for hours. I’m honestly considering starting a Kickstarter to make this happen. Will people give me money for spend a weekend with Jose? I’m afraid to actually look up his daily rate. It’s either gonna be too expensive and crush my dreams, or I’m gonna think it’s affordable and end up spending all of my money.

I’ve barely even scratched the surface with this guy, and I can’t wait to see what he does next. I’ll just leave you with a few more Gems from Jose.

Hey Cheryl @theacademy I'm a cuban actor. heard you need minority voters. With my Piranha Sharks film this year I qualify. how do I apply?

hug for u MLK

Keep doin your thing Jose. I got my eye on you.